Reducing the need for drenching, dagging, and then more crutching to prevent dagging, are major ways to control costs in sheep farming, and as the average age of hill country sheep farmers increases (currently 60+), these chores become even less attractive. Genetics has got to be exploited much more in future, to reduce these costs and increase the sustainability of sheep farming.

Research has shown that a sheep’s ability to ‘resist’ the damaging effects of internal parasites has a genetic component, and the trait is referred to as ‘worm resistance’. Worm resistance can be measured by a Faecal Egg Count (FEC), and is best done on young sheep (weaned lambs/hoggets) when their immunity to worms is still developing up to 10-12 months of age. After this, immune development does drops rapidly and what the animal has gained (i.e. its genetic potential modified by the rearing environment), can only be boosted. There are a range of things that can slow up immune development and anthelmintic drenching is the main one – so delaying drenching of all young sheep is important, otherwise it confuses the identification of their developing genetic immunity. Measuring immunity to worms is also best done during the ‘spring’ and ‘autumn rise’ when worm larvae are migrating up the fresh moist grass leaves to be eaten. Then after mating in the gut, they produce millions of eggs that are passed out to contaminate the pasture again where about 80% of the worm lifecycle resides. It’s here where reducing the population is very difficult.

Research came up with the concept of worm resilience and declared it was a separate trait to worm resistance, and it seems to have appealed to some breeders who are selecting for it. A FEC is done on each sheep which is then weighed, and when the FEC results come back, you keep select those that have gained most weight since the previous test. So it supposedly identifies sheep that can perform while carrying worm burdens, which may vary greatly in size. This is unduly complicated and as it takes no account of faecal consistency there’s a very high risk of selecting ‘resilient’ sheep that may maybe have low FEC and grow well, but produce wet faeces and hence produce dags – and that’s the last thing we want. It’s important to keep things simple, and this is best done by breeding for ‘worm resistance’ as it’s a clearly defined trait and with a heritability in the 25-30% range.

There are many environmental reasons why sheep scour and produce dags, but research has shown that there is a genetic component (with a heritability of around 25-30%) for faecal consistency. So it’s worth using it as a trait to reduce dags in a flock – realising it will not happen over night! When Dr Leo le Jambre and Dr Helen Newton Turner of CSIRO developed Faecal Egg Counting (FEC) 40+ years ago in Australia, all samples were compared on an equal basis by correcting them for Dry Matter (DM). This was because wet faeces (scour) with their diluted worm load per gm of faeces, passed through the gut much faster than dry faeces (marbles). But as drying faecal samples involved too much extra work and cost correcting for DM was ignored or forgotten about as FEC testing developed by veterinary laboratories and companies providing testing equipment. Turner and le Jambre were aware of these practical problems so developed a simple scoring system based on the visual wetness of the faeces, which again has not been used by FEC testers, as it means assessing faecal consistency when collecting samples for FEC. Dalton developed a simple scoring system (Faecal Consistency Score or FCS) similar to that of le Jambre and Turner and is used by Fernleaf (see below). It’s very simple to use – you multiply the FEC by the FCS and rank animals in that order. So no matter how low the FEC, if the animal is producing loose faeces, it will not rank highly for selection. But to get a really accurate faecal sample for FEC, you need to feel the faecal formation in the rectum with your finger or use a plastic probe to carefully draw out a sample, which then can be used for a FEC. To help recording, just include the FCS score as a last digit to the sheep’s tag number, so it’s easy to do the multiplication when you get the FEC data.

Rectal faecal sampling is not a popular practice so some breeders use the SIL ‘dag score’ to be included in a SIL index. You use a chart of pictures of dirty backsides and select the one which is most like the individual sheep. At least it makes a crude start to reduce dags but cannot be anything like as accurate as rectal examination of faecal formations in the sheep’s colon – see below.

This is the scoring system we use, and it’s simple to follow and has worked well. Please see photos below: 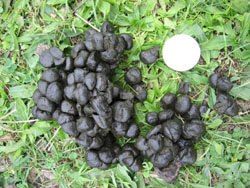 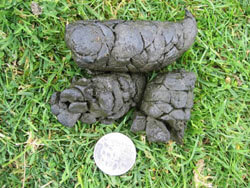 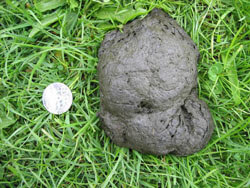 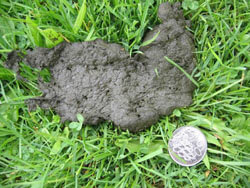 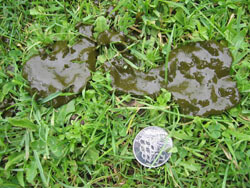 Genetic gains may be slow but they are not lost, and will always be expressed if the environment allows it. They are low cost to achieve and are sustainable. There are three components to making genetic gain.

Heritability is the amount of ‘total variation’ measured in a trait, which is regularly passed on by the parents from one generation to the next. The rest of the variation is caused by differences in ‘environmental’ factors, which are not passed on in the animal’s genes and always have a bigger effect than genetics. Heritability of 25-30% is considered as medium to high, and similar to fleece weight and growth rate, so can be improved by selection. In contrast, fertility and survival traits in sheep are low around the 0-15% heritability range as they are controlled much more by environmental factors. Heritability values cannot be altered. How effective the heritability level finally is in the flock depends on the two factors below.

This is the real key to making genetic gains and is where the breeder can make a big impact. It’s a measure of how much the parents for the next generation are better than the population average. If you mate average males with average females, then the next generation will be average performers. You need parents as far above the flock average as possible to make any meaningful gain, and this is what flock recording and SIL records provides – all the data to pick top parents. Clearly you can get a bigger SD for a ram than for the females in his mating group. Think of the SD as ‘selection pressure’ that can be increased or decreased depending on needs and animals available to pick from.

This is the ‘average age of the parents when the offspring are born. The fastest you can go in sheep is to mate ram lambs to ewe lambs, but this is not regular good practice because of the lack of performance data on these young sheep.

How components fit together

Breeding success is all in this formula. Genetic Gain/year = Heritability x Selection Differential Generation Interval To get a real winner out of this formula, what is above the line must be big and what’s below the line must be small. So you need a massive Selection Differential, as you can’t alter Heritability, or reduce Generation Interval very much. FEC and FCS link No genetic link (genetic correlation) has been found so far between FEC and FCS, but from practical observation (in the Fernleaf flock) after faecal sampling, a large number of sheep with low FEC have low FCS (marbles and hand grenades). This may be environmental but even if it is, it’s a positive effect –as such sheep will not need either drenching or dagging. But with low FEC, there will inevitably be a wide range of faecal consistency. The sheep we want to find are those with both low FEC and low FCS, and never to be tempted to keep any sheep with low FEC and loose faeces or scouring. That’s why multiplying the FEC by FCS clearly shows the true value of a sheep’s worm resistance. Farmers comment how pleasing it is when driving around the farm to see clean ewes with clean lambs even when on lush grass or crop. They clearly have the genes we need to deal to increase worm resistance and reduce dags. Farmers also add that they never see a dirty ewe with clean lambs.

Conclusions: Why do we want sheep that produce faecal marbles?

Where are the marbles formed in the digestive system?

This is a bit of physiological magic – how a sheep (also goats and deer) can turn liquid faeces in the large intestine into marbles in the final stage of the colon. The peristaltic movement of the bowel does it. It’s magic!

The photos below are of the final part of the colon, one containing a large ‘hand grenade’ formation and the other full of ‘marbles’.

Please do not hesitate to contact us for more information:

Email Us: by using the simple email form below: